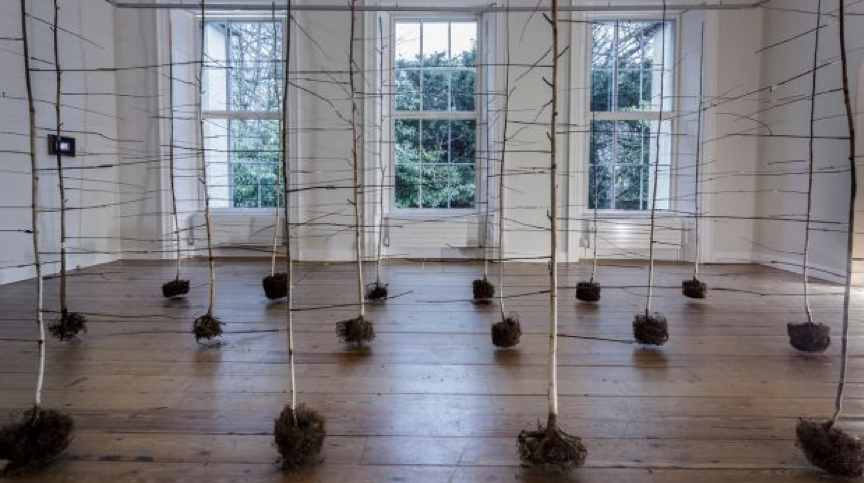 The Past is a Foreign County is an exhibition by Anita Groener which opened this week at The Lab, Dublin. It has travelled from Limerick City Gallery, via The Dock , Carrick-On-Shannon, its fourth outing will be at  West Cork Arts Centre in October, 2019. The central installation is a grid of twenty young birch trees, suspended inches above the floor, root ball intact. The tree branches have been realigned into a network of horizontals held in place by metal pins and cord. This is nature supplanted, altered – we slowly notice tiny figures standing on individual branches and so begin to read the work in terms of the human story. Anita Groener, came to Ireland from the Netherlands in the 1980s, she herself is a ‘foreigner’, but one who made the choice to live here. The work is concerned with migration and mass movement of peoples who have no choice – people whose lives are uprooted, placeless, impermanent.  Networks of branches might be read as holding cages where people who don’t matter, people without status, ‘small’ almost invisible people, are held for indefinite periods before being moved on elsewhere – anywhere.

With each new showing of the exhibition the installation has to find its ‘fit’. We tend to think of exhibition spaces as universally conforming to the white cube template – but not so. The Lab has a double ceiling height , it requires a particular solution, to which Anita Groener and her technicians bring finely tuned expertise. A  framework extending from the lower ceiling level perfectly resolves what seemed impossible.

Art Basel has been cancelled for 2020. The blockbuster…

On The Loose / The Other Side of White /

Covid19 has turned the world upside down. In a radio…

Something has been nudging me to write a blog  –…

On The Loose / Quatuor Voce /

Quatuor Voce who featured at this year’s West Wicklow Festival,…

On The Loose / Theo Dorgan: Time on the Ocean /

Books often sit on my shelves for a quite a…

On The Loose / Wolfgang Amadeus Mozart: The magic Flute /

While I’d  claim contemporary opera to be of greater personal…